There’s a huge choice of motorcycle routes to get to Carson Valley, Nevada. Twisty, scenic backroads lead here from most of the major population centers in the West. Wherever you are, there’s probably a great ride that will get you here.

Here are some of our suggested rides from the Bay Area and Northern California.

One of our favorite motorcycle rides from the Bay Area is California State Route 88. This route crosses the Sierra Nevada at Carson Pass at 8,574 feet (2,613 meters) above sea level. Carson Pass is one of the more dramatic trans-Sierra passes, has relatively light traffic, and is mostly open year-round. It closely follows the Emigrant Trail used by overland wagon trains headed for California beginning in 1848. More than 250,000 people crossed over the Sierra Crest between 1848 and 1869, when the Transcontinental Railroad opened. The new cross-country train trip only took seven days and cost about $69. The earlier journey, typically walking alongside a covered wagon loaded with a family’s household goods, took about six months.

The Carson Pass route offers spectacular views of several High Sierra lakes, volcanic rock formations near Kirkwood Ski Resort, and the rugged terrain around the Silver Fork of the American River and the North Fork of the Mokolumne River. State Route 88 begins at State Route 99 in Stockton, California and ends right near our headquarters in Minden, Nevada. 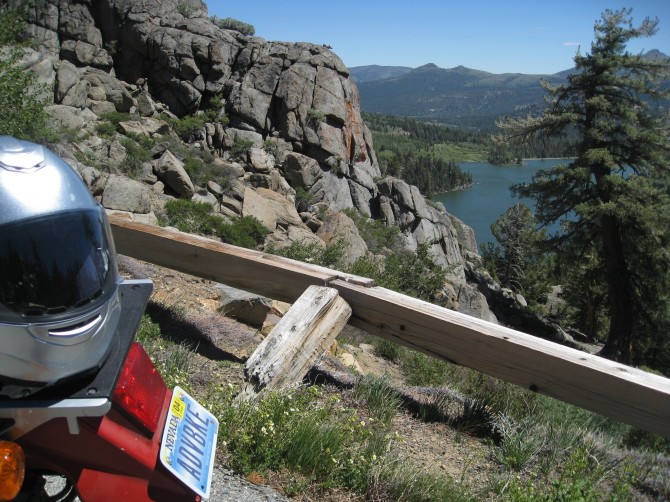 View of Red Lake from just off State Route 88, at Carson Pass.

State Route 4 over Ebbetts Pass is one of the most beautiful motorcycle routes in the Sierra Nevada. It is also one of the least traveled of all the trans-Sierra passes. The road climbs to 8,736 feet (2,663 meters) above sea level. Pick up the Ebbetts Pass route in Copperopolis, California and ride it 113 miles to our headquarters in Minden, Nevada. The Ebbetts Pass National Scenic Byway will make up 61 miles of your ride. The road was originally surveyed in the 1850s as a potential crossing for the Atlantic and Pacific Railroad Company. It became a booming toll route in 1861 filled with silver miners headed eastward for the Comstock Lode in Virginia City, Nevada. Today the highway is still raw and rugged, at times too narrow to support a painted center stripe. For more watch our Ebbetts Pass video, and see the Ebbetts Pass Scenic Byway Association at scenic4.org. 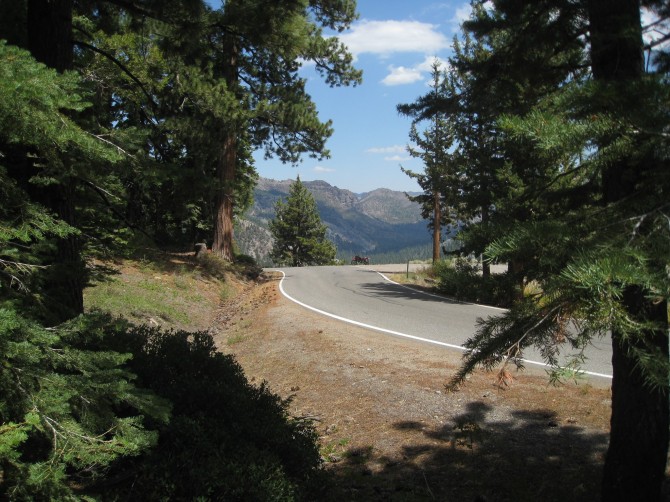 Most of the traffic over Donner Pass is on Interstate 80, one of the main east-west highways in the US. Although it has some great Sierra Nevada views, it would not be our first choice of roads. But some of the best motorcycling in the area is right nearby, on old US 40, another beautiful and historic road.

In 1844, the Stevens-Townsend-Murphy Party crossed the Sierra near what would later be known as Donner Pass, becoming the first group to bring wagons over the mountains. The party was led by Elisha Stephens who eventually settled near what is now Cupertino, California. Stevens Creek, and by extension Stevens Creek Boulevard, are named for him, although with some creative spelling along the way. Another leader of the group, Dr. John Townsend, also settled in the Bay Area. He was the first licensed physician in California, and served as Alcalde of San Francisco. Townsend Street, adjacent to the train station in San Francisco, is named for him.

From the west, access the old Donner Pass route via Hampshire Rocks Road at Cisco Grove, just off Interstate 80. The road ends near Donner Lake, in Truckee, California.

Driving US 50 over Echo Summit is the most popular way to get to the south shore of Lake Tahoe. It’s a beautiful road with some very dramatic views. On summer weekends, particularly on Fridays, it is often choked with cars and RVs headed for the mountains to escape the city life of the Bay Area or the heat of the Central Valley. If you can get away another time, this can be a very pleasant motorcycle route.

US 50 begins just west of Sacramento at Interstate 80. It ends more than 3,000 miles to the east in Ocean City, Maryland, on the Atlantic Ocean. The portion of US 50 that crosses Nevada is most famous as “The Loneliest Road in America.” If you are headed to or from Carson Valley across the Great Basin, this is an excellent motorcycle route. The road closely follows the route of the Pony Express that carried the mail between California and Missouri from April, 1860 to October, 1861. Genoa, on the western edge of Carson Valley, was the site of Station 165 of the 184 Pony Express stations along the 1,900-mile route. Woodford Station, in Woodfords, California, just to the south of Carson Valley, was Station 167. 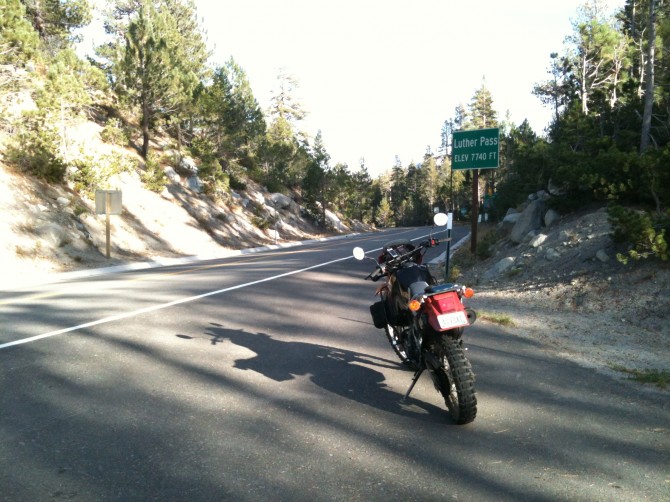 A quick break on a motorcycle ride over Luther Pass, on State Route 89.