It’s spring here in the High Sierra. The mountain passes are beginning to open up after their annual winter weather closures.

Motorcycle riding on Monitor Pass in the Sierra Nevada

If you haven’t had the chance to spend much time in the Sierra, you might be wondering what these mountain pass closures are all about. These are public roads, right? Shouldn’t they be open any time you want to use them?

That would be great. But the mountains, and the weather, have their own way of doing things. The Sierra Nevada has some of the most dramatic and severe winter weather on earth. The deepest snowfall ever measured in North America was at Tamarack in the central Sierra. In March of 1911 the snow on the ground there was 451 inches deep. That’s more than 37 feet, or 11.45 meters. The winter of 1906-1907 brought 884 inches (73.67 feet, 22.45 meters) of total snowfall, according to wunderground.com. Tamarack is just off State Route 4 on the Ebbetts Pass ride.

The Sierra Nevada stretches about 400 miles north to south and divides the Central Valley in California from the Great Basin of Nevada and Utah. The mountains are higher on their southern end than in the north. Mount Whitney, the tallest peak in the contiguous US at 14,505 feet (4,421 meters), is about 180 miles south-southeast of Lake Tahoe. The lowest point in North America is at Badwater Basin, in Death Valley National Park, just 85 miles from Mount Whitney. This is a land of extremes.

So how do those of us who live in the Eastern Sierra get our stuff delivered in the winter? Caltrans, the California Department of Transportation, attempts to keep some of those passes open year-round. Interstate 80 at Donner Pass, US 50 at Echo Summit, and State Route 88 at Carson Pass are open most of the time. During a winter storm the roads may be temporarily closed due to heavy snowfall. And shortly after a storm they might stay closed while Caltrans uses explosives and heavy equipment for avalanche control. When you ride over Carson Pass look east for the howitzer mounted at Red Lake and aimed up toward the highway. There’s another one visible from US 50, just below Echo summit. Yes, the state fires artillery shells so we can drive over the mountains. Pretty cool, no?

Caltrans even publishes the dates the seasonal passes open and close. But one of their coolest tools is the QuickMap, an interactive map showing live data from highways around the state. We’ll be keeping a close eye on this to know when all the passes are open.  And you can use it to help figure out the best route to come on up and ride with us. Our 2013 event is August 22-25. Have you got your tickets yet? 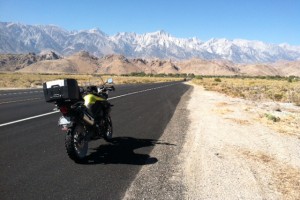